Montemar, a winery in California’s Sta. Rita Hills, recently partnered with Steve Gertman of Ascendant Spirits to create two new grappas. Made from the pomace of Bentrock Vineyard pinot noir—the skins, stems and seeds upcycled after fermentation—the spirits are double-distilled in an alembic pot still. The final bottlings contain only the heart of the distillate—Gertman discards the head and tail as well as 40 percent of the liquid. Purified water brings it down from 94 to 40 percent ABV and some of the yield is aged for three years in French Oak barrels previously used for chardonnay, resulting in both a clear and an amber-hued offering.

Montemar’s Traditional Clear Grappa is distinctly grapey and slightly salty with ripe pear, green melon and a woodsy quality, like bark stripped from a young tree. It’s round in the way that California pinot noir often feels riper than Old World styles. More savory than floral, it finishes with a touch of anise. The Barrel Aged Grappa hints at cacao and bananas foster, then finishes with smoky pear, caramel apple and tropical fruit notes.

I shared these new grappas with the bartenders at 71 Above, in downtown Los Angeles, where I work as a sommelier. Asked to create a cocktail using the Barrel Aged Grappa, they split into two camps—one group going bold and bitter, the other citrusy and floral. Matthew Kane created The Poseidon using 1.5 ounces of Gold Grappa, 0.75 ounces of Brooklyn Amaro, 0.25 ounces Campari and 4 dashes of orange bitters. The result is spirit-forward and savory, the amaro adding hints of cinnamon to the cacao and caramel notes in the grappa, creating what feels like a twist on a Negroni. Still, I gravitate toward Genaro Garcia’s Pegasus for its lighter body, sweet florals from Lillet Blanc and balanced citrus from the addition of grapefruit bitters and orange peel. If you’re craving something more bitter, Garcia suggests adding a bar spoon’s worth of Suze, the French apéritif made from gentian root, to add body and texture to the drink. 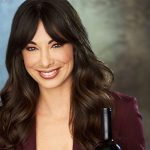