Changing dramatically the notion of the pre-modern wine industries in the Middle East, the Israel Antiquities Authority announced in early October the excavation of the largest Byzantine winery yet discovered in the world. The site is outside the town of Yavne/Yibna, about 20 miles south of Tel Aviv. Likely constructed in the fifth or sixth century CE in what was then the Byzantine province of Palaestina Prima, the planning and scale of the complex stunned researchers. While no records have been found yet to show who owned or built it, “This obviously wasn’t a small family business,” says chief archaeologist Dr. Elie Haddad, noting its potential annual production capacity of 530,000 gallons (equivalent to 3,212,570 modern 750mL bottles).

As evidenced by the remains of amphorae on site that match others found in Gaza, 30 miles to the south, the winery was clearly producing for export and was likely a significant source for the “Gaza” wine that was once lauded in Constantinople and around the Mediterranean. (It was named for the point of export, just as the wines from Portugal’s Douro were named for the city of Porto.) The winery’s design includes five large presses, fully symmetrical, each 2,400 square feet in size, as well as smaller ones, also in symmetry; channels for free-flowing juice; foot-treading pads; octagonal stone fermentation vats; kilns to manufacture amphorae, and places to store them.

Yavne, founded by the Canaanites around 2000 BCE, has been the home of successive peoples and civilizations. Indeed, before the discovery of the current site in 2019, grape pips, wine presses and pottery from the Persian period 2,300 years ago were found nearby. Writings from Talmudic texts speak of Jewish scholars debating one another from vineyards in Yavne during the second century CE. Later, when the winery was built, Yavne was a cosmopolitan town, with a population of Christians, Samaritans, pagans and Jews. It isn’t certain, at present, what sort of wine was made at Yavne or the grape varieties used, but an analysis of grape pips and amphora residue should provide answers. According to ancient sources, the wine from Gaza was “white as snow,” but there’s no reason to doubt that a winery that could produce on this scale might also have had some good salespeople. As for future discoveries, Dr. Haddad is certain there are many to be uncovered, but, he adds, “I’m going to be working on this for a very long time.” 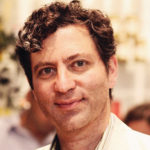 Jamal Rayyis is a NYC-based writer, editor and educator—and copy editor for this magazine. A pioneer in covering Middle Eastern wine, he is at work on a book on the politics of wine in the Middle East and occasionally updates his blog at palatesavvy.com.