Pozole played a large part in Danny Mena’s childhood in Mexico City. “You go to the nearest restaurant, bring your pots and containers and you reheat it at home,” he remembers. “My dad would always get it without vegetables. We would sit and wait for it, and we’d eat two quesadillas with tortillas made of thick masa while we were waiting.” Based on hominy, the stew is a staple throughout the country, with as many variations as there are regions in Mexico.

Now the chef and owner of La Lonchería in Brooklyn, New York, Mena recently launched the first edition of Bowl of ’Zole, a celebration of the dish. Gathering ten Mexican chefs working in New York City, he asked each to bring their best version; meanwhile, Arik Torren, a partner in the event and the founder of Fidencio Mezcal, invited 33 mezcal producers to pour their wares.

The point, Mena is quick to clarify, wasn’t so much to find perfect pairings between the mezcals and pozoles. Instead it was to celebrate foods and drinks that have been produced in Mexico for hundreds of years but have only recently made their way across the border. Like mezcal, pozole dates to precolonial times—the Nahuatl people called it pozolli, or foam, after the foam produced by boiling hominy, the large, dry corn kernels that define the dish. Pork, a frequent addition, became common after the Spanish colonized Mexico.

From there, the variations are endless. In Guerrero, the locals make pozole verde, turned green by the addition of pumpkin seeds; a red chile–spiced version is more common around Mexico City and Jalisco. At Bowl of ’Zole, the variations extended to Sinaloan-style, with a pigs’- head broth, from Luis Arce Mota at La Contenta, and Colima-style, with Blue Point oysters, from Hugo Orozco at Las Santas. There was even a matzo-ball version from Chai Trivedi at Kitsch in the Hotel Indigo, and a pozole-inspired riff on ramen from Julian Medina of La Chula.

Mezcal, of course, boasts a similarly large range of expressions: The flavors change depending on the type of agave used and the place it was grown, the roasting method, the distillation and the distiller. It was fascinating to find, tasting through a fraction of the 100-plus mezcals on hand at Bowl of ’Zole, that the best combinations showed a sort of synchronicity between the earthy, nutty flavors of the hominy and the roasted, umami character of the mezcals. And the elevated alcohol of a mezcal wasn’t such an issue next to the richness of the stews; it was even refreshing, cleansing the palate between spoonfuls.

“Granted, the sides offered with pozole are regularly cabbage, oregano and chile piquín, not a shot of mezcal,” Mena says, but he suggests that may soon change. “Honestly, we didn’t even see the boom of mezcal in Mexico City until ten years ago.” But a shot of mezcal may just be one of the best companions for your pozole broth.

Mena’s pozole verde— inspired by a dish he ate at Mexico City’s Los Talucos—was one of the standouts at the event, richly flavorful yet surprisingly refreshing and light, as he’d made it with a vegan stock, then added a paste of pumpkin seeds, tomatillos and chiles. Deeply umami, it’s especially good with Del Maguey’s earthy, salty Wild Tepextate mezcal from Oaxaca’s Sierra Norte, or Nuestra Soledad’s light and vegetal espadín mezcal from Ejutla, south of Oaxaca City.

Recipe adapted from Made in Mexico: The Cookbook
by Danny Mena with Nils Bernstein (Rizzoli New York, 2019)
Serves 10–12 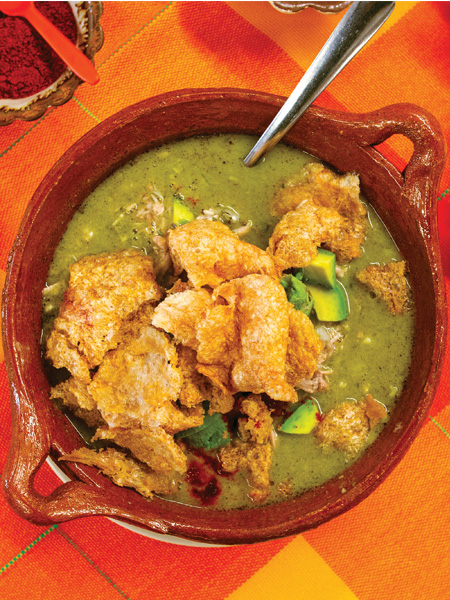 For the Vegan Pozole Blanco