In our new feature, Pairing the World, we ask wine professionals from various cultural backgrounds to share recipes that hold an important place in their lives—and we ask them to call out the wines they would pair them with. To start off, we spoke to Heather Johnston, of Brooklyn’s Good Wine, who offered wines to pair for her family’s Jamaican Rice and Peas.

When all four of Heather Johnston’s grandparents immigrated from Jamaica to Harlem in the 1920s, they brought with them their recipes for rice and peas, a popular dish in Jamaican households, especially during Sunday dinners, holidays and celebrations. According to Johnston, the dish, which appears in various iterations throughout the Caribbean islands, originated from the diets of farmers, many of whom were formerly enslaved, requiring an affordable but filling, protein-rich meal. Johnston’s recipe calls for black-eyed peas, which were more readily available to her grandparents in Harlem due to the Great Migration of former slaves from the south to the north. In Jamaica, the peas were usually “gungo” (pigeon peas) or red kidney beans.

Johnston, who began her career as an independent filmmaker, fell in love with wine on a trip to San Sebastian for a film festival, after tasting a mineral-rich Rioja. An affinity for hosting parties, which she inherited from her mother, took her to the French Culinary Institute, then on to WSET, where she gained Level 2 certification. From there, she combined her passions, creating video blogs in the early days of YouTube with recipes and beverage pairings. It was then that she started to think about wine pairings for recipes from her childhood, with rice and peas first coming to mind due to its versatility.

“There’s certain cheats I have in pairing wine,” says Johnston. “Shallots and mushrooms, macaroni and cheese, they pair with everything. Rice and peas is pretty much one of those dishes as well.” Johnston thinks the wine needs a strong fruit component, perhaps a Côtes du Rhône, to offset the Scotch Bonnet heat; or try a weighty, aged riesling. At Good Wine, the Brooklyn shop she purchased seven years ago, Johnson would suggest two options: Monteforche’s Lo Sfuso di Collina, a fruity, cabernet franc–based blend, or Mary Taylor’s Anjou Blanc, which has enough body to match the rice and peas’ substantial weight.

We tried the recipe with two wines: Domaine Gauby 2014 Coume Gineste Terroirs de Calce in the Cote Catalanes and the Louis Jadot 2019 Rosé de Marsannay Domaine Clair-Daü. The Coume Gineste, a rich, biodynamically grown white with flavors of kumquat, ripe nectarine, and baker’s yeast, bolstered the flavors of the rice and peas, its saline minerality picking up on the dish’s own saltiness. The rosé from Jadot, with its clean strawberry scents and beautiful balance complemented the dish’s peppery heat, especially when the pepper was cut up rather than whole. Adding cauliflower and chorizo to the dish, the Gauby turned nutty with the cauliflower while the rosé brought up the chorizo’s spice in a gentle, pleasant way.

This recipe has been adapted from Heather Johnston’s Jamaican Rice and Peas. 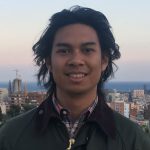