My first love was riesling. It was the first wine that made me a believer. Though I’ve never been a huge fan of sweet drinks or sweet food, my go-to was a relatively sweet style of riesling: The high acid was just enough to cut through the wine’s lush flavors of citrus and peaches. Whew, chil’, I drank it—a lot!

At the time, I was working as a restaurant host and had signed up for a course at the Wine School of Philadelphia. Just before I started my classes, I remember escorting some guests to their table and one of them asking me what wine I would recommend with dinner. I responded that it depends on their taste but that I was into riesling right now. To which he very nonchalantly replied, “Of course you are.”

The encounter seemed harmless enough, but I immediately felt a sense of shame. It hadn’t occurred to me that enjoying wine wasn’t going to be enough, at least, not if I was going to enter this uncharted territory without bringing a stereotype with me: “Black women love sweet wine.” It was time for me to move on.

That’s not to say I never drank riesling again. I had the occasional glass, and, being a curious somm, I’d never turn down an opportunity to sip on an older vintage wine. However, it was no longer my preference. I used rieslings for pairings at work. I reveled in the grape’s history and versatility. But I was not a fan, personally.

Growing up in Philly, surrounded by the incredible restaurant scene, I could get some of the best and most authentic food throughout the city. And, from an early age, I had developed a love for all kinds of Caribbean food and music. So, when I left Philadelphia for Miami, a mecca for Caribbean culture, I was in heaven. My love for roti, in particular, was at an all-time high.

Roti is a round flatbread made from stone-ground whole-meal flour. It originated in the Indian subcontinent, and later, after it moved to the West Indies, roti became a curry stew folded tightly inside the flatbread. West Indian roti generally contains potatoes and some form of meat, such as chicken, duck, goat, beef, conch or shrimp. It can be spicy, so, most of my friends and I, when we ate roti, would often reach for beer.

Roti remained my favorite Caribbean dish until I got pregnant and couldn’t stand the smell of it. And then, soon after, I moved to Atlanta and left Caribbean food behind. At least, until one day, as I walked out of my local grocery store, I noticed a little Jamaican restaurant. I could tell just from the sign that this was going to be good.

It was a cold Atlanta evening, and I was back home with this piping hot roti. I remember taking the first bite—all the flavors and spices rushing over my palate and the warmth of the Miami sun rushing back to my senses. For the first time in years I desired a riesling, so I popped one that I was planning to use for a tasting. It was absolutely delicious! Could be because I knew the intense aromatics would complement the spice in the roti and the acidity would scrub my palate, and my attitude. Could be because I no longer subscribed to the myth that I had to act a certain way to be respected in the industry. I could kick myself for missing out on riesling all those years.

Why had I never done this before? I mean, sure, I know the pairing rule—of spicy foods and off-dry wines—but Caribbean food is often left out of that equation. Roti and riesling: It’s when I knew I could embrace that young wine enthusiast from Philly even as the wiser wine professional I am today, mind, body and spirit. 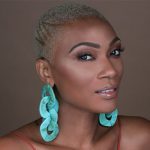 Tahiirah Habibi is the founder of The Hue Society and a co-founder of The Roots Fund. She uses her skills to bridge the intersection of wine and culture and is passionate about making an indelible impact in the wine industry, assimilation not required.