On a barge docked on the East River below the Brooklyn Bridge, The River Café was on the front lines of the storm surge from Hurricane Sandy in October 2012. Joseph DeLissio, who tends the restaurant’s wine list, has been working out of the same wine room since 1978, when his list featured, perhaps, 150 wines. Though the selection had expanded—to more than 700—the space had not. And while half of the restaurant’s inventory was kept off site, a large proportion of one of New York’s greatest restaurant wine collections was wiped out. Like many others who were hit hard by the storm, DeLissio is now taking stock. We caught up with him for an update on his plans for the list moving forward. —JOSHUA GREENE 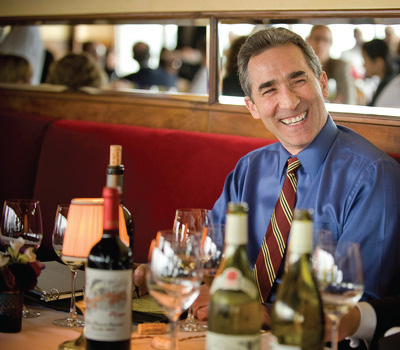 It was the triple whammy: the storm, the dirt from the river, the violence of things falling off shelves; then the temperature falling in the second storm, no electricity so you couldn’t see anything; and then the mold. The only thing that could have made it worse would be for it to have happened in the heat of July or August.

To be honest, I’m not confident in the remaining inventory. Half was either broken or destroyed. We had broken bottles of Pétrus. We had a steak knife float into the cork of a 1972 Romanée-Conti—embedded itself in the cork, pushed the cork in three inches and the wine drained out.

I’m estimating the loss at around $400,000 to $450,000 in wine and liquor. Our inventory, I would guess, is normally around one million, one million two. That doesn’t include what it would cost to replace those things. You can still get things like Opus, but the old Heitz, the old Rayas and La Tâche—we had a vertical of La Tâche—the Ramonets. If you look to buy those wines at auction, you’d have to add another ten to fifteen percent to that total.

A disaster like this makes you rethink the direction you’re going to go in. You’ve got to remember, having heavy inventory dictates the direction of the wine program, and we were historically very heavy into California cabernet. I will get to sculpt the wine list and it will probably focus more on European wines, maybe less on California. These cabernets are so expensive now. Before, on our list, you could purchase ’99 Mayacamas for $150 or $180—I won’t be able to do that any more.

I don’t know if I’ll be as heavily invested in older wines because the market and the tastes have changed so dramatically; today a lot of people want younger wines. The younger Bordeaux and Burgundy were stored off premise, so we have our Bordeaux from 2000, 2001, 2005. It’s not like we’re devastated and can’t provide, it will just be different.

When this happens to a long-established wine cellar, it gives you a chance to pause, to consider how to hone the old wines. I don’t like it, but I have to recognize the fact that there is only a small group of people seeking out older wines today. People want the flavor of the month. I can’t control that. It’s like the surge.

The barge will be redone; the on-land facility, we’re still, you know, in a do-over. It could turn out to be a good thing. When you’ve operated a place for so long, you know what you have and don’t have. You organize things differently with the wisdom you gain over the years. I’m half sad and half excited. It’s very bittersweet. Different is not bad, just different. We’ll try to make different better.

But for now, I’ve become a fifty-eight-year-old stock boy.

This story was featured in W&S February 2013.