You know the saying, “Too many cooks in the kitchen spoil the broth.” But what about too many sommeliers?

The W&S staff plays sommelier at our respective Thanksgiving feasts, a role often complicated by family traditions—some loved, some eagerly forgotten. Or by the food—a subject on which everyone has an opinion. Or, in some years, by the family…. There are those Thanksgivings, in fact, in which we wish we could simply nab our favorite dish and bottle of wine and take them off to someplace quiet to enjoy them in peace. Here are some of our favorite bottles and dishes—and a few recipes to boot. 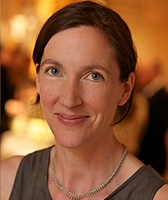 Thanksgiving was never very exciting at my house—save for the pecan pie.

By the time I was three, I knew that a PEE-can is something you put under the bed, and a peh-CAHN is the most glorious nut on earth. And I knew to listen for the UPS man come mid-November, because once we heard that familiar thump—the sound of a case of fresh-crop pecans direct from my dad’s home state of Texas landing on the porch—the holidays could begin.

Then it wouldn’t matter if the cat attacked the turkey (it did), or if the new stuffing variation turned out poorly (we never made the same one twice). So what if the gravy was gluey or we forgot the creamed onions? We could have forgotten everything, as long as there was pecan pie.

By now I’ve figured out that most Northerners don’t hold pecan pie in such high regard; up here, pecan pie is generally travesty, a sort of sugar custard with mealy pecans as decoration. The Texan version—or the one I invented under my dad’s coaching, at any rate—inverts the proportions, calls for toasting the nuts and uses a flavorful sweetener like sorghum syrup or Lyle’s Golden Syrup instead of corn syrup. Additions like chocolate or maple syrup are anathema; the point is pecans, naturally sweet and oily, highlighted by the toasty, crunchy piecrust and the golden chew of the custard. To me, this is the flavor of Thanksgiving.

I know Bourbon seems like the all-American match, but in fact I find it too sweet, too much of the same with its vanilla and caramel overtones. Better, in my view, to go peaty. Bitter-edged. Strong. Something to cut the sweetness and play up the nuttiness—the nuttiness all around. Stranahan’s out of Denver, or McCarthy’s out of Oregon, or Hudson Manhattan Rye, a 92-proof whiskey from Tulhilltown Spirits in Gardiner, New York. If you care to join me, I’ll share the pie recipe here.