Riesling: A White Interloper in the Land of Big Reds – Wine & Spirits Magazine

Alan Tardi, an American chef living in Piedmont and a longtime contributor to W&S, attended the 2015 Nebbiolo Prima in Alba, an annual five-day invitation-only tasting of recent releases of Barolo, Barbaresco and Roero wines. In the coming weeks, we’ll post his reports.

Wednesday evening there was a sort of renegade gathering of Langhe producers of riesling, taking place outdoors at Casa Nicolini, a hotel and restaurant in Barbaresco. “We are all different,” proclaimed one of the producers, “but united by the fact that we are crazy and love riesling!” With a large bonfire sending flames up into the night sky and illuminating a long table groaning under the weight of large ice buckets holding tall tapered bottles of white wine, it did resemble some sort of surreptitious rite, except for the periodic cheers from the room inside, where a crowd was watching Juve (Torino) play Madrid in the finals on a large flat-screen TV. (Juve eventually won.)

While the Langhe has other indigenous white varieties—favorita, nascetta (Novello), arneis (Roero), timorasso (Tortona), erbaluce (Canavase) and cortese (Gavi), not to mention international grapes like chardonnay and sauvignon blanc—riesling seems to be gaining a foothold. It does quite well in higher, steeper, east-facing slopes, especially those with gravelly limestone soil, where it can produce beautifully acidic, long-lived wines that are true both to the variety and to this particular terroir. These wines were also excellent companions to the evening’s food— trout two ways (lightly smoked and marinated “carpione” style, from a farm in the hills above Mondovi), and pizzas baked in the outdoor wood-burning oven.

While many of the 21 winemakers present were recent converts, a few have been producing riesling here for some time, including Ettore Germano of Serralunga and Aldo Vajra of G.D. Vajra in Barolo, who was one of the first in the Langhe to begin experimenting with riesling in 1985. Towards the end of the evening the younger Vajra son (also named Aldo) walked around carefully pouring tastes of their first commercially produced riesling. It was remarkably fresh and crisp, with a slightly oily texture, ripe quince and dried pear flavors and long, lingering finish. It lasted with a hint of minerality and residual sugar. The vintage was 1992. 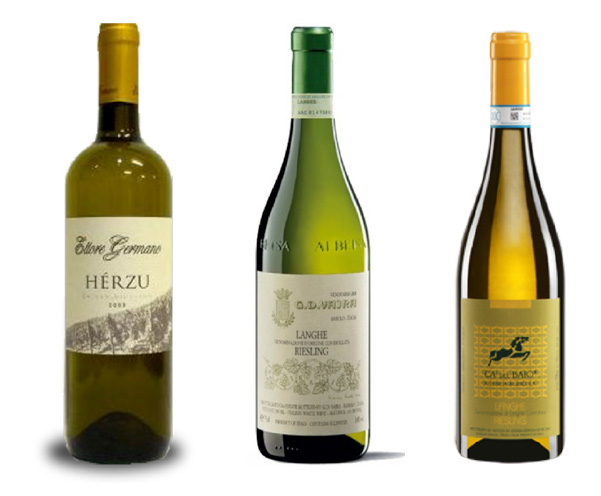