Alan Tardi, an American chef living in Piedmont and a longtime contributor to W&S, attended the 2015 Nebbiolo Prima in Alba, an annual five-day invitation-only tasting of recent releases of Barolo, Barbaresco and Roero wines. In the coming weeks, we’ll post his reports.

The morning tastings comprise the core of Nebbiolo Prima, but they are not the only activities.

This year there was a visit to the Enology School of Alba. Since I live in the area, I’ve been by the school a hundred times but never actually been in. So I took the opportunity to visit, along with a journalist from China and a blogger from Germany.

Founded in 1881, the Scuola Enologica di Alba is Italy’s second oldest and one of the most important, playing a critical role in the development of winemaking in the Barolo area, especially in the aftermath of World War II when many children of local winemakers first began studying enology. 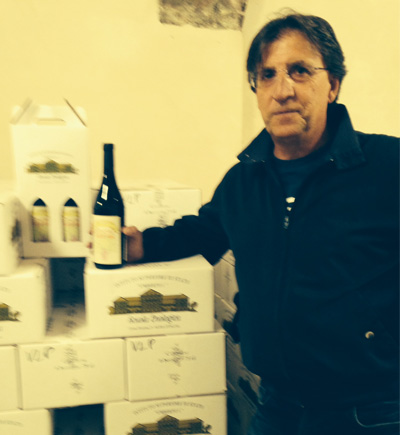 Vincenzo Barbero, director of Alba Enology School, with bottle of Valelapena
In Italy, young people choose their career path at the age of 14; the enology program lasts six years, after which students get a job or continue studies at the University of Torino, which has a research facility on the Alba campus. According to director Vincenzo Barbero, most—but not all—of the students come from Piedmont winemaking families. (Many of the students also assist the sommeliers at Nebbiolo Prima by emptying spit buckets and replenishing breadsticks and water.)

The school maintains eight hectares of vineyards where students learn techniques of vine pruning and maintenance, as well as a winery in a brick structure built over 100 years ago where they go through the process of transforming grapes into wine. The school actually produces about 30,000 bottles, which are mostly sold in the area. “The important thing for us is teaching the students about growing grapes and making wine, under the guidance of our enologist instructors,” said Barbero. “What we sell helps fund our pedagogical activities. Please be kind,” he said when he offered us a taste. We were.

During the tasting he told us about another project the school began a few years ago. “Did you know there’s a vineyard in the Alba penitentiary?” Located next to the Alba-Barolo road just before the turnoff to Alba, I’ve passed by the prison two hundred times, though I’ve never been in there either and had no idea there was a vineyard inside its imposing walls.  “The inmates cultivate the vines and we vinify the grapes. Last year we brought six inmates here to teach them how to do it. They learn a trade they can use when they get out; we sell the wines and the proceeds go back into the prison. When we started, we made a few hundred bottles; this year we’re up to two thousand. It’s called Valelapena,” Barbero said, chuckling.  (The name is a play on words: The expression “vale la pena” means ‘worth the trouble’ but, as “pena” also means penalty or punishment, in this context it also means ‘worth’ or ‘equal to the crime.’)

We were kind with that one, too.