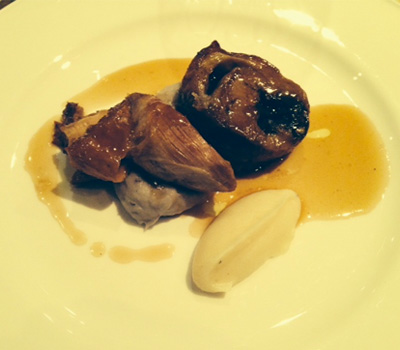 Besides the morning tasting of the just-released newbies, the opening day of Nebbiolo Prima offered several opportunities to taste older wines. In the afternoon a tasting in the vaulted cellars of the former Calissano winery in Alba featured wines from the famed 2004 vintage. And in the evening, participants and producers sat down together for dinner at one of three local restaurants.

These organized dinners (there are two of them during the week) are an opportunity for participating journalists to get to know wine producers in a more relaxed setting and to taste their wines with food—and without having to spit.

I went to Al Castello, the restaurant in the Castle of Grinzane Cavour , which once belonged to Count Benso di Cavour, one of the people responsible for creating the wine we now know as Barolo. I hadn’t been there since chef Alessandro Boglione had taken the helm, and the food, grounded in traditional Piemontese cuisine but with a creative flair, was excellent.

His first course was a crispy terrine of bollito misto with a frothy salsa verde, and Fratelli Alessandria’s Verduno Pelaverga. The fresh, bright fruit and crisp acidity of the wine cut right through the richness of the meat while the spicy aromas added another dimension to the dish. It also helped loosen up the atmosphere: The producer Vittore Alessandria made me get up and explain the story behind pelaverga’s name three times in three different languages (while I won’t explain it a fourth time in writing, I will say that verga, the Italian word for rod or staff, is also commonly used to describe the male organ).

Next came a saffron risotto with asparagus. For this I went back to a wine we had as an aperitif, a Roero Arneis 2008. “Arneis is not really a wine meant for aging,” said Anfossi Giuseppino of Ghiomo winery, who was sitting at my table, “but if you keep the yields low, pick at just the right time and do a short maceration on the skins, it can hold up quite well.” This wine was holding up very well indeed, wiith a full body, amber color and hints of caramelized starfruit and lemon confit.

As the evening progressed, bottles began flying around between tables, one in particular standing out: The Barbaresco Rabaja 2006 made by Castello di Verduno. Elegantly structured, classically aristocratic yet earthy, it was just the thing to balance the full-flavored, roast kid that arrived as our main course.

This wine raised the question at our table of how it was that a winery in a Barolo village made a Barbaresco.

The answer (which also had to be translated several times) was that the owner of the Castello di Verduno winery married a winemaker from Barbaresco—which, the locals pointed out, is proof that love can conquer anything, even the longstanding rivalry between the two appellations.