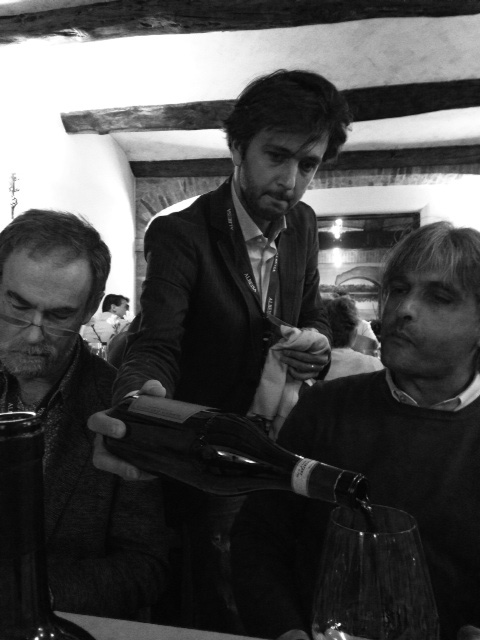 For the second dinner of Nebbiolo Prima, I went to Rabaya in the town of Barbaresco, a cozy little place with beamed-ceilings and a patio overlooking the famous Rabajà vineyard. The food here is simple, traditional fare. We started with an insalatina di gallina (shredded hen salad), followed by tasty tajarin pasta with Bra sausage, and a thin slice of braised veal with hazelnut sauce. The bottles, proffered by our producer hosts, flew around even more wildly then they did at the first dinner. It was a terrific opportunity to discover some interesting wines and take a break from nebbiolo immersion.

The first was an aromatic nas-cetta from Le Strette in the Barolo town of Novello. It turns out, as producer Savio Daniele explained, that it’s one of the few to be made entirely from nas-cetta.  “Nas-cetta was admitted into the Langhe DOC two years ago,” Daniele said, “and the regulations admit up to 15 percent other varieties. The grapes can also come from anywhere within the Langhe viticultural zone. But if the label says ‘del Comune di Novello’ [as this one did] it must be made entirely from nas-cetta grown in the town of Novello.”

Then there was an unusual white pelaverga from Castello di Verduno, with crisp acidity and just a hint of the grape’s typical spicy aroma, and a 2009 riesling called “Herzu” made by the Serralunga winery of Germano Ettore. Grown in a vineyard high up in the Alta Langhe,  it had a pronounced aroma, pale yellow color and pleasant dryness with a touch of residual sweetness. While it was good, it didn’t really go with any of the food, so I cast about for something else to drink.

“Would you like to try this with the pasta?” asked Valerio Mossio as the tajarin was being served. “I’m a dolcettista.” Mossio runs the Fratelli Mossio winery in Rodello, located outside the Barolo zone, where many producers are replacing dolcetto with nebbiolo. Mossio isn’t: He focuses solidly on dolcetto and makes several different versions. The one he poured into my glass (called “Gamus”) is labeled “Superiore” indicating a wine aged for one year, a category I didn’t even know existed for dolcetto.

It looked like liquid velvet. It felt like liquid velvet too, and was packed with bright, vibrant fruit, despite being a 2009. While the intense flavor of the wine dominated the delicate sausage ragù, its density melded perfectly with the pasta—which, made in the traditional Piemontese manner with lots of egg yolks, melted in the mouth right along with the wine.