For the opening dinner at Effervescence LA, a sparkling wine celebration in May, chef Javier Lopez at 71Above worked with the restaurant’s wine director, Catherine Morel, and Dan Perrelli of First the Wine/Then the Story, to design a menu that went with 16 selections of Krug—two verticals of Grande Cuvée (six consecutive editions numbered 166 back to 161), some 2004 vintage wines and some collection wines dating back to 1988 and 1982. 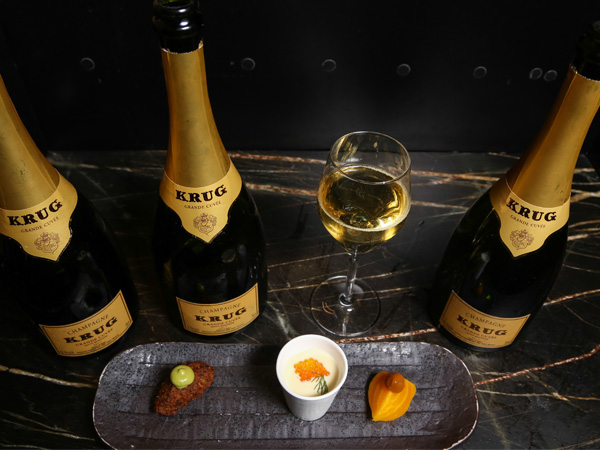 What was astonishing about this $1,800 dinner was that there was no meat. The menu did include seafood—a diver scallop course (turnip, kohlrabi, sprouting cauliflower, Meyer lemon-horseradish, chowder), and a Spanish octopus dish (shelling beans, bacon, fines herbs, puffed wild rice, preserved lemon) which several guests considered the best of the night.

But the head-turner with the wine was one in a series of three tiny bites—a taste of avocado with citrus, seaweed, Thai basil, sesame, puffed rice, black radish and lime oil. I made the error of eating this particular bite in one bite, then regretted my profligacy for the rest of the evening.

That one bite was like an engine for the bubble energy in the wine, a brake on the acidity and a sine wave of richness.

Then, an odd thing happened with the next course—another series of three bites which were, I suppose, designed to parallel three accompanying Grande Cuvée wines. Jérôme Jacoillot, an enologist at Krug, presented them as a vertical: Different perspectives on the Krug style based on different vintages, with varying selections of reserve wine. (Each of the Krug Grande Cuvée editions does taste quite different, though they all share an intention). The corresponding bites included a satisfying cold soup of green garlic, potato, crème fraîche, sweet garlic, smoked trout roe and dill, and a golden beet with raisin purée. But it was the falafel with smoked avocado that rocked the wine: just one half-moon puff of ground chickpeas crisply fried and topped with smoked avocado. The flavor depths of the Champagne resonated with the taste of the falafel for minutes.

Avocado and Champagne was new to me, so I asked Perrelli how it had come about. He explained that he and his team dined at 71Above five times in advance of the dinner in order to plan the menu with chef Lopez and Morel. He had brought bottles of Krug to taste with different menu selections—including the avocado with citrus—and Lopez came up with other ideas based on the wines.

Then I wrote to chef Lopez, who told me that he offers falafel on the bar menu, but without the smoked avocado, which he serves on a rice cracker as part of an amuse-bouche for guests. After tasting one of the Krug wines Perrelli offered, he decided to put the two together.

“I just went on a whim on what I thought might pair well,” chef Lopez explained. “I believe it worked well because of the brioche [character] in Krug. I’m not sure if there’s anything besides butter that goes better with bread than avocado…. avocado toast. That might just be the reason behind it, or the instinct.”

A whim and instinct. I had never considered avocado and Champagne as a pairing before, but it sure made sense in Los Angeles.

This is a W&S web exclusive feature.
photos courtesy of Eugene Lee