In the night of July 14-15, six inches of rain—nearly twice this sector’s average for that entire month—set the River Ahr raging through a usually bucolic valley known for many of Germany’s most celebrated pinot noirs, devastating the communities along its shores. Orders to evacuate came too late. At least 138 people perished, houses were tossed about like toys, and infrastructure was eradicated. Only a handful of the region’s winemaking facilities escaped large-scale destruction. How high the waters crested above flood stage may never be officially known, because, on approaching 19 feet, they swept away the gauges.

The harrowing tale related by Dörthe and Meike Näkel—whose father, Werner, elevated Weingut Meyer-Näkel to elite status—vividly illustrates the catastrophe. These sisters survived the tsunami that engulfed their winery by clinging to one another and to the crown of an ancient tree, from which they were rescued seven hours later. Cellars, press houses and equipment at other prestigious estates—J.J. Adenauer, Deutzerhof, Jean Stodden, Josten & Klein, Bertram-Baltes—were similarly wrecked. For Julia Bertram—a shooting star of Germany’s wine scene—the 2020 harvest had been only her seventh; for Marc Josten, his tenth. Old-timers and new-comers alike will be faced with beginning again. Wines in barrel were almost entirely lost; the fate of those in bottle is more varied and, in some instances, still uncertain.

As soon as roadways could be sufficiently cleared, wine growers from other German regions began arriving. Werner and Frank Schönleber from the Nahe, who have long enjoyed a mutual marketing arrangement with the Adenauers, brought generators and must-pumps for draining the flooded cellars. Gitterboxen—massive wire mesh crates—began arriving by the trailerload. At Meyer-Näkel, Nahe vintner Cornelius Dönnhoff employed a crew to begin filling them. “The bottled wines were all in cartons,” he relates, “completely soaked and muddy. We had to extract them and do a rough cleaning. Then we brought them to our estate, where we’re in the process of hosing them down.”

Grief and horror did not prevent Ahr growers from focusing on the one irreplaceable element of their success—their vineyards—or on the pinot noir grapes that are the basis for their livelihood. This is a valley almost entirely of steep vineyards, and all but the lowest-lying parcels were unscathed. But the vines were at a critical juncture, the canopies needing to be managed, as well as the crop levels. “There are hundreds of fellow winegrowers from all regions out working the Ahr vineyards now,” relates Dönnhoff. For a few days, skies over the Ahr were a no-fly zone for private aircraft, but helicopters were then able to spray against outbreaks of downy mildew triggered by the high humidity.

Saving the 2021 crop is one thing; processing it, another. Optimists among local growers and rescue volunteers from outside the region envision crush pads being improvised in time for harvest and initial vinification taking place in situ. The fallback will be trucking grapes to facilities in other regions.

Guido Halbig, who heads the local branch of Germany’s official weather service and, with grim appropriateness, advertises his expertise in chaos theory as well as numerical and theoretical meteorology, suspects the devastating weather system that stalled over western Germany in mid-July signals an ominous climatic tipping point having been reached: a weakening of the Gulf Stream. That could signal massive mid-21st century disruption of German viticulture, conceivably including a dramatic reversal of recent local warming trends. While the climate may have reached a tipping point, Julia Bertram clearly has not. “I think it’s only 0.7 hectares, or 8-10% of our vineyards, that are damaged,” she posted. “So we are quite happy. Most important is that the whole family is healthy. We will start again with vintage ’21.” 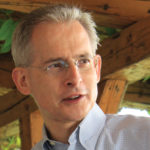 David Schildknecht has followed German wines for several decades, both as a wine buyer at Vintner Select and as a longtime writer for publications including Wine & Spirits, The World of Fine Wine and Austria’s Vinaria.