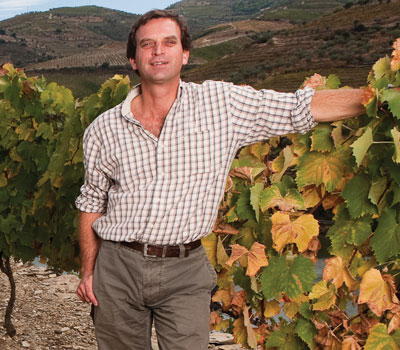 Charles Symington
By the time you read this, most, if not all, of the 2016 Vintage Port will have been sold, a very short crop of some of the most polished wines the Douro has ever grown. But it’s a vintage worth committing to memory: These wines will be around for many decades to come, their flavor impact grown out of an unusual season.

David Guimaraens, who oversees the wines at the Fladgate Partnership (including Taylor, Fonseca and Croft), reports that the season started with a wet winter and spring. Mildew brought down the yields, and the weather delayed veraison until mid-July, two and a half weeks later than normal. Then temperatures shot up, with 13 days over 104˚F before the end of August. “There was a lot of humidity in the soil, which allowed the vines to catch up,” Guimaraens says, “until the heat stopped the vines from ripening their fruit.”

The vineyards that fared the best in these conditions were north-facing, according to Charles Symington, who makes the wines for his family’s estates (Graham’s, Dow’s, Warre’s and Cockburn’s among them). “These vineyards developed finer aromatics as they were better protected from the heat.”

Though the vintage was widely declared, the quantities are small. At Quinta do Noval’s Nacional vineyard, the ancient, own-rooted vines normally produce very little. Christian Seeley of Noval reports that the crop in 2016 at Nacional was down to 1,300 kilos per hectare, from a normal range of around 1,700 kilos. At Graham’s Quinta do Malvedos, the vines at the Stone Terraces that Symington uses in a special bottling produced at that same sparse level, about 1,350 kilos per hectare. At the Fladgate Partnership, Guimaraens says they are off by 40 percent from a normal declaration. The wines are distinctly different in character, too, he says: “The challenge for those looking at them is to understand the subtleties.”

Asked about the polish we noted in the wines, Guimaraens points to the significant improvements that have been made in viticultural practices as well as in the quality of the spirit used in fortification. “The spirit was oilier in the 1980s,” he says. “That subdued the fruitiness [in young Vintage Port]. The tannins were more aggressive because of that character.”

You won’t find aggressive tannins in the 2016s, but you will find a number of beautiful wines in our report in the December 2018 issue on page 90.

This story was featured in W&S December 2018.