Despite the recent Montalcino scandal, there was the usual swarm of tasters at the massive stand set up for winery members of the Consorzio del Vino Brunello di Montalcino. One winery, however, acknowledged recent events with the t-shirt pictured in this photo. Self-proclaimed “Brunello militante”, Le Presi is a winery located near Castelnuovo dell’Abate in the Montalcino appellation. 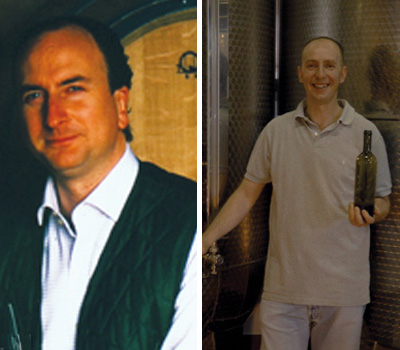 Marco Ricasoli Firidolfi(left); Marco Porello (right)
The current round of Italian wine scandals notwithstanding, attendees at this year’s VinItaly–certainly one of the most crowded editions of the fair in recent years–got straight down to business in Verona. VinItaly is many things to many people, a chance to network and strike deals, or that once–a–year meeting with favorite producers. But the fair is above all a preview, a massive anteprima in anticipation of new vintages coming to market.

And if there was one phrase this year that quieted scandal gossip then it was a simple one: 2007. Over the course of three days, I heard repeatedly from producers working in all parts of Italy that 2007, qualitatively speaking, is going to be great, potentially one of the best vintages in decades.

Reasons for this praise vary. The weather during ‘07 was certainly strange. Indeed, the winter of 2006-2007 was so mild (with scarcely any snowfall in the Langhe, the Roero–based Marco Porello reminded me, and almost no precipitation there until late March), that it could be argued that the season didn’t even happen. Warm temperatures persisted through spring, sparking an early start to the growth cycle. Barolo producer Luciano Sandrone reports lower crop levels partly due to hail in June. Weather conditions were otherwise even, he said, with the early– and mid–summer heat mitigated by cooler temperatures in August and September. Like everything else in the vintage cycle, harvest started early, around the middle of August.

Carlo Schiopetto poured his family’s ‘07 whites next to the ‘06s, and the differences between the two years were striking. In the ‘06 wines, high sugars at harvest showed in correspondingly high alcohol levels and a roundness in the finished wines, Schiopetto said. The ‘07 whites, by contrast, showed a clarity in their flavor expression that Schiopetto attributes to the even temeratures during the late summer harvest–which, as elsewhere, was about three weeks early.

In Tuscany, it seems that the Indian summer conditions during harvest made for excellent fruit quality. “2007 is going to be the best vintage ever at Rocca di Montegrossi,” said Marco Ricasoli Firidolfi of the Gaiole-based estate. He reports that the dry weather and high temperatures led to correspondingly high sugar levels by mid–summer. However, cooler August temperatures checked the rising sugar levels and allowed the grapes to reach physiological maturity. By harvest, he said, “the grapes had arrived like the pasta, perfectly al dente.”

Tasting young wines–either recently bottled or tenatively blended for VinItaly–is never precise; the snapshot of the 2007 vintage on offer in Verona this year will change and continue to evolve. But if the preliminary chatter and excitement on the part of producers is any suggestion, then that evolution is likely to be for the better.

Based in San Francisco, Wolfgang Weber was the Italian wine critic at W&S. He now works with the Revel Wine and Selection Massale, and continues to write freelance. Nebbiolo is his spirit grape but if he were to live anywhere in Italy, he’d choose Liguria.