We look forward to welcoming Jonatan García Lima at the Top 100 Symposium in New York City. He’ll be pouring his Suertes del Marqués wines on January 14, 2020 at Union Park Events. Here is Joshua Greene’s profile of the winery printed in our 2020 Buying Guide: 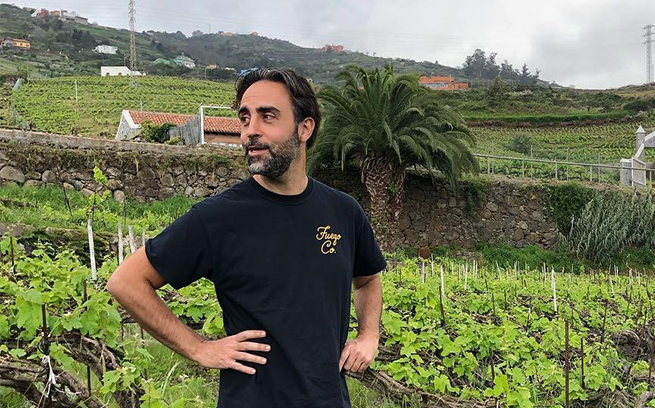 The García Lima family started buying up old-vine plots in the Valle de la Orotava in 1986. The valley, on the north coast of Tenerife, is an ancient landslide off the island’s ridge of volcanic peaks. It formed some 500,000 years ago, likely caused by the ground collapsing around a caldera. The family’s 27 acres of vineyards rise up the valley from 980 to 2,460 feet above the sea, on hills that continue to climb to the highest point in Spain, 12,000 feet at the top of El Teide. Francisco Javier García Lima financed his interest in these old-vine parcels with the family’s furniture company, which his son, Jonatan, helped to run. The father-and-son team established a winery in 2006 and, ten years later, Jonatan left the furniture business to take over winemaking himself. He brought on Luis Seabra, from Portugal’s Douro Valley, to advise him; both men are fascinated by the potential of the local treasures—plots of thick-trunked vines, growing on their own roots in clay over volcanic rock, their canes braided in massive arms that may extend for 10 to 30 feet, each of those braided arms headed in different directions—what the locals call cordón trenzado. There is no other viticulture like it in the world. And those vines produce wines with no corollaries. At his best old-vine parcels, García Lima finds that the ancient vines ripen the grape stems in close alignment to the fruit so he can make those wines entirely with whole clusters. He crushes the grape clusters by foot, allowing the fruit a lengthy maceration and a spontaneous fermentation in concrete vats, then he moves it to large, neutral French oak barrels for aging. Seabra and García Lima have worked on refining the process, working without pumps and making harvest decisions based more on freshness than ripeness, raising the bar on the elegant expression of the island’s volcanic terroir.

2017 Tenerife Valle de la Orotava El Chibirique Vinas Viejas Listán Negro (95 points)
El Chibirique is one of the lower vineyards of the estate, a block rising in elevation from 1,250 to 1,375 feet. It’s a small amphitheater facing east where the vines are between 60 and 80 years old, their canes braided in the long, horizontal serpentine twists of the local tradition. The volcanic soils and traditional viticulture deliver a wine with raw mineral power that slowly shifts toward richness, in fragrant flavors of black cherry and plum skin. The wine’s facets evolve for hours, focusing in on a pure and compelling taste of a beautiful place.

Taste this and more of the top-scoring wines of 2019 at the Top 100 Symposium in NYC.