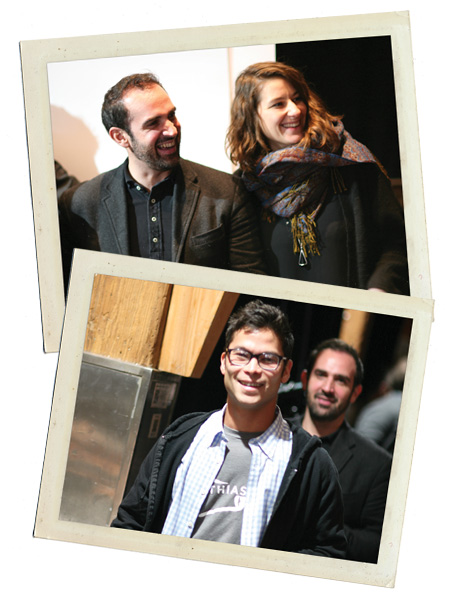 Michael Madrigale, Michelle Biscieglia and Josiah Baldivino first teamed up in 2014. After winning our inaugural Sommelier Scavenger Hunt with their selection of Napa Valley cabernet sauvignon, they repeated their win the following year with six compelling examples of grenache from McLaren Vale. This year, they took the road less travelled. “We chose the underdog,” says Madrigale. “Nobody in the States knows the wines of Ontario, but they deserve the spotlight.”

Norman Hardie 2013 Prince Edward County Unfiltered County Pinot Noir
“This is the coldest and furthest east area of Ontario,” Madrigale says, comparing the Trenton limestone and clay to the composite soil in Burgundy. “It’s 10.9 percent alcohol, with lots of saltiness, phenolic ripeness and high acidity.” With its mouthwatering precision, this was a favorite for a number of taste-off attendees.

Pearl Morissette 2015 Twenty Mile Bench Niagara Vineyards Pinot Noir
Heading to the Niagara Escarpment, Madrigale introduces François Morissette as “a Quebecois who comes from working many vintages in Burgundy for Freddy Mugnier and Jean-Marc Roulot. He is a bit of the natural wine flag-waver in Ontario: He adds no sulfur, no additives, and only ambient yeasts go into the fermentation.”

Hidden Bench 2015 Rosomel Vineyard Unfiltered Pinot Noir
The team included this as a wine from dolomitic limestone, from the Beamsville Bench on the Niagara Escarpment. “Hidden Bench uses the Rosomel Vineyard for blending for aromatics, for the floral component. This is the first year when they’ve bottled it separately,” Biscieglia says.

Flat Rock 2015 Twenty Mile Bench Gravity Pinot Noir
“We have these benches, which are basically the slopes that come up from the lake,” Baldivino explains. Flat Rock grows on Twenty Mile Bench, where the soil is clay loam till over limestone. That, and the temperature-control system of Lake Ontario, is what this wine is all about, he says.

Coyote’s Run 2014 Four Mile Creek Rare Vintage Pinot Noir
“St. David’s Bench is really far from the lake, so here it’s a little bit warmer,” Baldivino says. “And it’s grown on clay soil, which is going to give you that riper, rounder feel.” Madrigale considers it the outlier in the flight: “The warmest wine and the one that uses oak as an ingredient.”