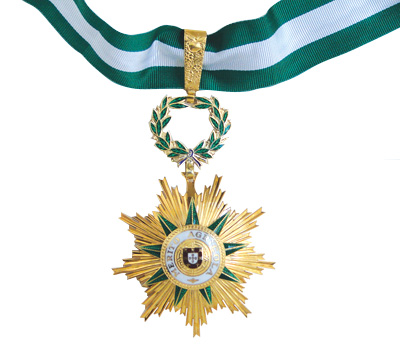 We’ve all seen the initials MS or MW trailing behind the names of wine professionals, but Commander?

On Tuesday, March 17th journalists, importers, and diplomats gathered at the official residence of the Portuguese Embassy where Ambassador João de Vallera awarded an Order of Merit to W&S’ own Joshua Greene.

Greene received the Agricultural Knightship in recognition for his advocacy of Portuguese wines. Vallera assured his guests that giving a green medal to a man named Greene while drinking Vinho Verde on St. Patty’s day was not intended to be a joke.

A night with the Portuguese Ambassador would not be complete without Port. For dessert J.M. da Fonseca 20 Year Old Moscatel de Setúbal Roxo, Quinta do Vesuvio 2003 Porto and Taylor Fladgate 2003 Porto were served along with an assortment of mousse and Portuguese cheese. After the plates were cleared, the newly anointed knight gave thanks, said his good byes and walked to his trusty steed, a ‘94 Saab 9000.