Jasmine Hirsch never believed she’d end up working with her father, David, at Hirsch Vineyards on Sonoma’s remote far coast. Olivier Berrouet didn’t have a second thought when he was offered the job his father, Jean-Claude, had held for more than forty years—making the wine at Château Pétrus in Bordeaux. Working with—or separately from—a famous father may not be the simplest career path—but the sons and daughters in the pages that follow have worked it out brilliantly. 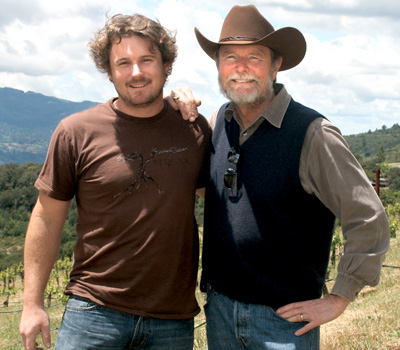 When you’re sourcing grapes in Sonoma County, it helps a lot if your father is Ravenswood founder Joel Peterson. “When I started Bedrock, my dad had worked with almost every old vineyard in Sonoma County,” remarks Morgan Twain-Peterson. “He always looked out for his growers. He always paid reasonable prices. As a result, I’m getting ridiculous vineyard sources for a winery with just three vintages under its belt.”

Joel Peterson says he never encouraged his son to go into the wine business, but “he probably didn’t have much chance of escaping from it.” Strapped to his father’s back, young Morgan tagged along to late-night punch-down sessions and tasted zinfandel grapes fresh off the vine as his father explored Sonoma. By the time Morgan was four, he had already visited Domaine de la Romanée-Conti. Still, Joel was surprised when, at five years old, his son decided he wanted to make wine. “He said, ‘I want to make pinot noir,’” recalls the elder Peterson. “I asked why and he said, ‘Because you said you’d never make pinot noir.’” Angelo Sangiacomo gave Morgan some grapes. “I did fifty percent whole cluster,” remembers Morgan. “I still have four cases left.” His inaugural vintage of “Vino Bambino,” as it was called, was poured at Blue Hill. From then on, he made a wine every year.


“Particularly when it comes to zin, I’m pretty old school. I would definitely say that his love of old vines has rubbed off.”

After high school, Morgan studied political science and history at Vassar and pursued graduate work in American Studies at Columbia. He was anticipating a career in academia, but the pull of Sonoma’s old vines was strong. Morgan returned to California, where he started out working at Ravenswood and studying for his Master of Wine credential before launching Bedrock Wine Co.

As to his dad’s influence on his winemaking? “I would definitely say that his love of old vines and his philosophy in the vineyard have rubbed off,” says Morgan. “Particularly when it comes to zin, I’m pretty old school.” Like Joel, Morgan embraces the challenge of fermenting zinfandel with native yeast, and he also shares his dad’s fondness for open-top redwood fermenters and aging in French oak. When asked about Morgan’s approach, Joel is particularly excited about Bedrock’s heirloom field blends. “They’re a throwback to what California should have been doing,” he says. 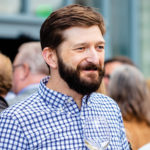