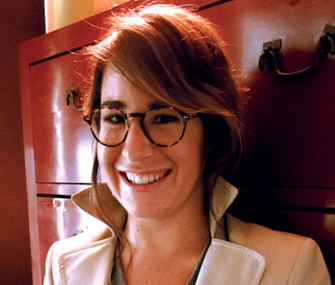 It’s become a rarity in the food and wine world to go a week without seeing a link to one of Talia Baiocchi’s witty and conversational articles. The 26-year-old wine journalism Jedi had no intention of writing about wine when she began her political science major and journalism minor at NYU. Baiocchi first opened up to the possibility while working as a maître d’ at The Mermaid Inn, where she was able to sneak sips of various bottles at staff trainings. “People turned me on to great wine there, and it turned out I had a memory for wine, like I did art history,” says Baiocchi. Working the 2006 harvest in Piedmont sealed her fate as a career wino, and when she returned, she took a job as a portfolio manager at Italian Wine Merchants. She kept her love of writing alive through a blog about music and wine.

Baiocchi took to pro writing when her boss, August Cardona, mentioned that a London-based website called WineChap was looking for a writer. After taking on the editor position for the New York chapter, it wasn’t long before Baiocchi had her hand in websites such as Serious Eats and Eater, and eventually in newsprint, at the San Francisco Chronicle.

“I think I discovered her the way all people are found nowadays,” says Jon Bonné, wine editor of the Chronicle. “On Twitter.” Since then, Baiocchi has become an asset to Bonné and the Chronicle. “When I need someone who can appreciate the nuances of regional European wine or who can cut through the usual junkety claptrap, I absolutely turn to Talia,” he says.

With only five years of legal drinking under her belt, Baiocchi maintains her freelance phenom status and is currently at work on her own complete beverage and lifestyle website, liquidantidote.com, scheduled to go live later this year.