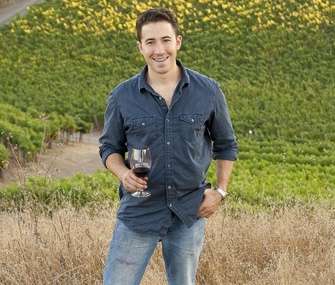 Born and raised in Boulder, Colorado, Jesse Katz got an early education in wine from his parents. “My dad started his career shooting album covers,” he says. “Dan Fogelberg, the Doobie Brothers. Then Michael’s American Bistro in Vail sent him to do a project in Napa. He fell in love with it, and it snowballed into a career.” By the time Jesse was 11, Andy Katz had finished his first photography book (on Napa and Sonoma), and was working on his second in Burgundy. Jesse, an only child, went with his parents to stay in Beaune. “You don’t get that experience over here,” he says, recalling times spent at the home of Olivier Leflaive and his family. “There they treat wine as a food and as an art.”

By the time Katz had graduated from high school, he had traveled to 58 countries. He went on to study business at UC Santa Barbara, and his father introduced him to Fess Parker, who hired him for the summer at his Santa Ynez Valley winery—“running SO2 numbers nonstop and a lot of cleaning floors,” Katz recalls. “I probably bugged the heck out of the winemaker—followed him around asking him questions, picking his brain. It wasn’t glamorous work, but I was really hooked.” So he transferred to Fresno State, where he received a scholarship that included putting in time at the campus winery.

Katz followed his interest in Bordeaux varieties to Argentina, where family friend Noemi Cinzano has a winery in Patagonia. Working with Noemía winemaker Hans Vinding-Diers, he learned “hands-on winemaking”—literally: “The only equipment we had were two pumps,” Katz says. “A team of thirteen women de-stemmed the bunches berry by berry. I crushed every lot with my feet. There was no press—we’d empty a tank overnight, then stomp around on it.” Social life was centered around dinner at the winery, where Vinding-Diers and Cinzano often tested Katz on wines poured blind. “I got to taste a lot of amazing wine, and it was remarkable, by the end, how much more trained my palate was.”

After stints with Bob Foley and Paul Hobbs, Katz sent his resume to Screaming Eagle, where he worked on the 2008 vintage. His boss, Andy Erickson, recommended him to David Ramey, consulting winemaker at Lancaster Estate in the Alexander Valley. Eight interviews later, Katz was hired as winemaker for Lancaster’s estate wines and for Roth, the label he’s helped develop with purchased fruit. It’s a heady position for a 27-year-old, Katz managing to balance his work with his avocation, snowboarding back in Colorado.