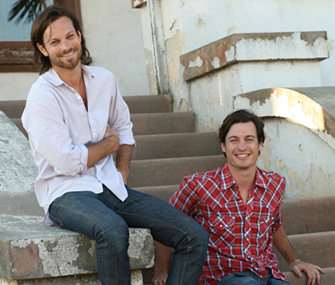 Andrew Mariani was bored stiff writing agricultural trade reports in Washington, DC, so his boss, suggesting he get out of town for a bit, arranged for Mariani to work on a farm in Greece. Mariani was no stranger to agricultural pursuits—his family has been farming walnuts in Yolo County, California, for years—but this was different. “It was a tiny little place run by an Egyptian family,” he says. “They were just starting out making wine, just enough to sell a little in London and have enough for themselves. But it was much more than a winery—there were animals, gardens and a constant stream of interesting people.”

Back in California, he enlisted his uncle, Andrew Avellar, a vineyard consultant, to help find land for a winery. Avellar lit on a former turkey farm outside the town of Sonoma. It looked like a long shot—the place had been on the market for three years, marred by the dilapidated turkey sheds and burnt-out soils—but Mariani discovered that it had been a vineyard in the 1860s and decided to coax the land back into farmable shape. Now he works with his brother, Adam, who’s done stints in France (at Guigal in the Rhône Valley) and South Africa. Together they’ve recreated Andrew’s Grecian idyll with a distinctly California vibe: Thirty-five acres of vines interspersed with vegetable gardens, fruit trees, beehives and various animals, backed by 150 acres of protected native forest. They call it Scribe.


“We want the vineyard and winery site to be a platform to reflect on what is good and pleasurable about the culture in California.”

Just as integral to Scribe is the rickety old hacienda on the estate, a former brothel that the Marianis open to a constant stream of friends, family and customers. Chris Kronner, the former chef of Bar Tartine, has been spending much of his unemployed time at the winery, whipping up meals from the estate’s gardens. “Andrew has this naiveté that leaves him willing to take on a lot without realizing how potentially difficult it can be,” Kronner says. “The first time I was at Scribe, there wasn’t even any electricity, yet he was still willing to throw a party. And as it’s become an official winery, it hasn’t lost that original vibe.”

Parties are essential to Scribe’s mission, in fact; that the Marianis happen to make dynamite pinot noir and chardonnay is almost incidental. “The vineyard and winery site we want to be so much more than just a place where wine gets put into a bottle,” Andrew says. “It’s a platform to reflect on what is good and pleasurable about the culture in California.”