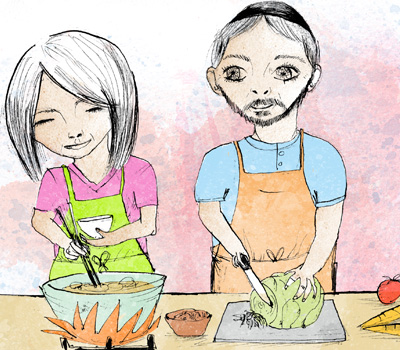 For a long time I had believed the Chinese were one of the tribes, because of Jews’ affinity for Chinese food, particularly on Sunday night. Besides, historians have verified that Marco Polo, en route to Kubla Khan (born Cohen), visited Silk Road clothiers to buy yarmulkes to trade for Riedel plum-wine glasses in China.     My belief was reinforced during the Senate Judiciary Committee hearing on the Supreme Court nomination of Elena Kagan, a New Yorker. Lindsey Graham, Republican of South Carolina, asked, “Where were you at on Christmas Day?” She replied, “You know, like all Jews I was probably at a Chinese restaurant.” Aha! Proof of a Jewish-Chinese nexus. Then poof! I remembered that on Christmas Manhattan’s Chinese restaurants are the only ones open. Later, I found solid evidence of an ancient Jewish-Japanese food link: the existence of Shalom Japan, a restaurant in South Williamsburg, a Brooklyn neighborhood near my maternal grandfather’s 1930s kosher butcher shop, and the ever so elegantly named Ivan Ramen Slurp Shop in Manhattan’s Hell’s Kitchen, owned by a Jewish guy, Ivan Orkin. (Incidentally, the Golan Heights Winery is negotiating to acquire a little known native Japanese white grape named koshu, which flourishes on Mount Fuji’s foothills. The sticking point: can the “u” be replaced by “er”?) Visiting Shalom Japan, a favorite of locals, I relished the lox bowl with rice, daikon, avocado and ikura (salmon roe). I had thought the Lox Bowl was the place where Yeshiva played the Fighting Irish on New Year’s Day and won, 13.99 to 13.98. Fusion lovers should explore Shalom Japan’s sake kasu (fermentation lees) challah with sake-dipped raisin butter. You’ve heard of a violinist’s violinist, a lawyer’s lawyer, a rabbi’s rabbi? This bread is challah’s challah. If you visit, order matzo ball ramen, served occasionally, and mochi blintzes, a chewy rice nosh. Even though Shalom’s co-chef-owner, Aaron Israel, was reared in Great Neck, Long Island, a Tel Aviv suburb, one of his periodic entrees won’t win kosher certification. It blends udon, beet horseradish, chard, root chips and Berkshire pork. I’ve never understood what Orthodox rabbis have against the Berkshires. At Shalom, you can order a cocktail called Oy Vey Iz Kir (Palmer Vineyards sparkling wine from Long Island blended with Manischewitz), inspired by the Yiddish moan oy vey iz mir: woe is me. You like bar mitzvahs? I drank He’Brew Messiah Nut Brown Ale, a mitzvah (good deed) from the bar. Reviewing ramencentric Slurp Shop in the New York Times, Julia Moskin wrote that Orkin “drops hints of American comfort food and Jewish tradition: a rice bowl topped with smoked whitefish; four-cheese mazemen, a hot noodle bowl with sauce; chicken katsu, cutlets fried in chicken fat.” She didn’t say whether the seaweed came from Miami Beach. Orkin owns two Tokyo ramen shops, which keep afloat thousands of well-off Yiddish-speaking Japanese furriers and doctors. Despite the high-volume eat-and-run clientele, you’ll find no brash Jewish waiter finger-in-the-chicken-broth chutzpah behind the counters. When I last checked, the Slurp Shop didn’t offer a wine list. The nearest equivalent to a wine was Dr. Brown’s Cel-Ray, a canned soda once called “Jewish champagne” that used to be sold only in delis as hot corned beef’s digestif. If you haven’t slept for 48 hours before downing Cel-Ray, it could taste like sauvignon blanc. You prefer brut zero? Order seltzer. This story was featured in W&S June 2014. illustration by Darcy Muenchrath