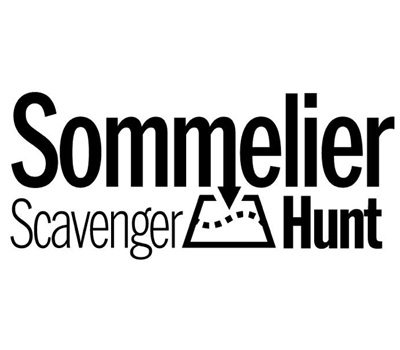 They chose not to use PowerPoint, asking for an easel and a drawing pad instead.

They were scheduled to be the last of five teams competing in the First Annual Wine & Spirits Sommelier Scavenger Hunt, as they had the richest wines, Napa Valley cabernet sauvignon. But logistics got in the way: A case of àMaurice Night Owl had landed in Napa Valley from Washington and was being driven down during the first presentations of the day, so we moved the Washington team to the last slot on the program and moved Napa up to fourth.

As Michael Madrigale introduced the first Napa Valley wine, Josiah Baldivino and Michelle Biscieglia pulled the cover off their drawing pad. There was a colorful line drawing of a stag standing on the edge of a cliff, two stick figures pointing their spears at its rump. Madrigale related a myth regarding the origins of the Stags Leap District name while Baldivino picked up a colored pen and drew the stag jumping off the cliff and landing down below, while Michelle drew the hunters turning red in anger. 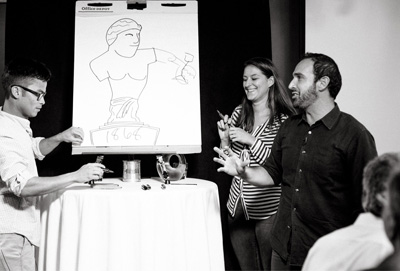 Baldivino and Biscieglia draw an image of To-Kalon while Madrigale describes Mondavi’s Reserve Cabernet
There was something childlike and magical about the moment. Everyone laughed and the team had immediately caught the attention of the group. We picked up the first glass, the Sinskey 2009 SLD Estate, a wine with the soft tannins that made Stags Leap District cabernet famous. That wine and the last, the 2008 Diamond Creek Volcanic Hill, bracketed the flight with the cleanest, fruitiest expressions of Napa Valley cabernet.

When they got to the Diamond Creek, and Josiah told the story of Al Brounstein smuggling grapevines through Tijuana, they drew a bunch of grapes, then added a sombrero, tassels and the sun in the sky above.

The humor lightened the wines, which were already lighter than many Napa Valley cabernets we were all used to tasting. 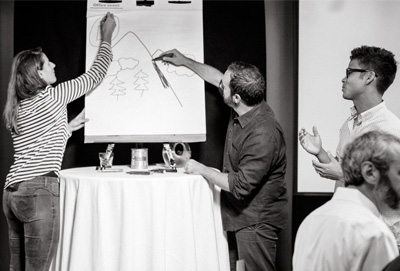 Biscieglia and Madrigale sketch the Mt. Veeder forest while Baldivino relates their visit to Mayacamas Vineyards. 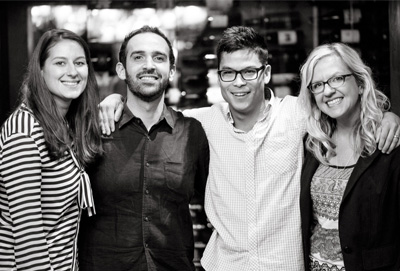 Team Napa Valley (from left): Michelle Biscieglie, Michael Madrigale and Josiah Baldivino, with Amber Mihna of the Napa Valley Vintners
The Mondavi To Kalon Reserve, a 2011, tasted fresh and delicious, an herbal fragrance dominating the wine’s core of fruit. Wines from Mayacamas and Smith-Madrone were powerfully structured, while the third mountain cabernet, the Diamond Creek, turned out to be ripe and exuberant in a flight of mostly dry-farmed, tight, mineral-driven cabernets with a lot of fresh herb.

These six wines reignited my love of the classic benchland and mountain-grown cabernets that turned me on to Napa Valley 30 years ago. I wasn’t the only one with such a reaction: They excited the audience as well, earning the team the most votes in our competition to discover the new classics of five great US regional categories: Finger Lakes Riesling, Santa Barbara County Chardonnay, Anderson Valley Pinot Noir, Washington Bordeaux-variety blends, and the winner, Napa Valley Cabernet.

This is a W&S web exclusive feature.
photos by Kelly Puleio