Originally from Memphis, Matt Tunstall headed to San Francisco in the 1990s to study food and wine. He put in almost seven years with the Plumpjack group, then worked for Elizabeth Falkner at Citizen Cake and Orson before he and his wife decided they were done with big cities. “We wanted to find a smaller town with a great food and wine community and some room to grow,” he says. They landed in Charleston, South Carolina, where Tunstall ran the wine program at Husk for four years. “That gave me the springboard to open my own place,” he says—something he did last January, opening Stems & Skins, a wine bar in the Park Circle neighborhood, with Justin Croxall from Bull Street Gourmet. If sales of bubbly are any proof, the neighborhood is mighty delighted to have them there. 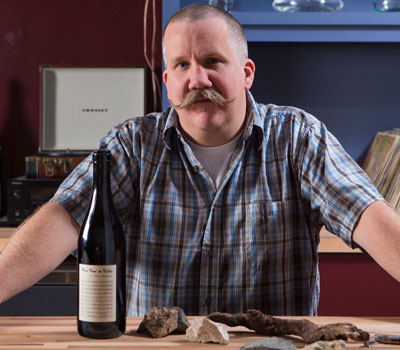 You sell a lot of bubbles, with Calsac Champagne and Josef Leitz Rosé Sekt as your two top-sellers.

I know! It’s the biggest surprise for us, too: In fact, rosé bubbles were our biggest seller this year. It doesn’t matter where they are from; the rosé bubble category is just speaking for itself. They can be from anywhere in the world. Right now we’re pouring a Lambrusco and it’s flying out the door.

It’s unusual to see a riesling among the top-selling bottles.

That’s the Bründlmayer [Kamptal Terrassen]: that’s a great producer, and I’ve been to Austria a few times, and love it; I always keep some Austrian wines on the list. That’s an important wine for me because people’s perceptions are still really out of whack when it comes to sugar levels; to have something bone-dry to pour them, that’s a teachable moment. When guests say, ‘I’d like something crisp and dry,’ I’ll pour them that, and they are blown away.

Rather than Beaujolais, you have a gamay from Salem Wine Co. in Oregon in the top-sellers. Why is that?

Thin-skinned aromatic grapes—I always keep a couple around. I use [the gamay] when people ask for glass of pinot; when they do that, I usually don’t bring what they ask for but pour a taste of a couple other things. It’s another teachable moment. Less than half, probably, associate gamay with Beaujolais; for the people who want it, we have the Lapierre and other Beaujolais by the bottle.

Where are the California wines?

I always sensed when lived [on the West Coast] that people drink more domestic wines there than they do on the East Coast. I’ve definitely grown away from California wines myself; the “new California” wine thing is really attractive, and I support those wines—we have some Broc Cellars on the list, things like that—but when people here want California wine, it’s a stylistic thing they are looking for; they are looking for wines with a heavier hand with the oak, a riper style.

I’d like to do more with Alsace—I think that the power of the wines and sugar levels do a lot with the food of our region. We don’t serve it at the wine bar, but when it comes to Southern barbecue, I’ve always leaned on Alsace whites. I think they do well with the rich, smoky flavors.

Also, wines from the Mediterranean islands—Corsica; places like that. With the rosés and high-acid whites on that really old soil, those wines are really interesting to me, and we’re seeing more of them here. I usually keep some Greek wines on hand, too. Ted Diamantis at Diamond Importers—he has a terrific portfolio. We do these olive and octopus skewers at the bar; for things like that I like to keep an assyrtiko around.

It looks like you do well with dessert and fortified wines.

Port sells itself, and Madeira’s got such a great history with Charleston; people know it well, so it pretty much moves itself. The Baumard Quarts de Chaume—a couple of bartenders got excited by a wine with age [1999]. The interesting thing is that I hadn’t planned on doing anything much with dessert wine, but this neighborhood is lacking in desserts; there’s nobody known for it. So now we have a whole cake or tart behind the bar every night. It’s been a niche that’s come along and brought dessert wines along with it. I have had people come in after dinner somewhere else in the neighborhood and order dessert and glasses of dessert wine; that’s their evening.