Originally from Texas, Charlotte Randolph studied Spanish literature and lived in Mexico and Spain prior to settling down in the Bay Area in 2012. She worked at numerous restaurants, including The French Laundry, before opening Californios with her sister and brother-in-law and taking over the wine program. She’s now on the lookout for wines that will match the restaurant’s reinventions of traditional Mexican fare. 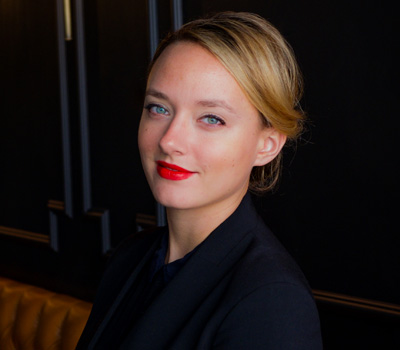 The guests who are dining have changed a bit [since the restaurant received its first Michelin star in 2015], which is what I have been looking forward to. It has definitely allowed us not to have to justify, or rather explain [the concept.] There’s a lot less energy being spent on winning people over, in that sense.

The list has gotten larger, and it’s building in quality. Last month, I bought a few bottles of a 1908 Madeira from D’Oliveiras. I had [a guest who], after finishing three glasses of it, said that they’d take three more. Then they just drank through the whole bottle of it—it’s probably the only bottle that exists out there! I never really felt [until then] that we had gotten there yet with Californios, so that was a cool, confirming feeling. He’s coming back next week, and I just ordered the only bottle of the 1901 Madeira that Rare Wine Company had, so I’m ready!

Out on a limb

Right now we have a yam and kiwi sorbet, and we pair it with the A. Margaine Demi-Sec [Champagne]. It’s a really hard dish—you don’t want to go too weird with it, as it’s already a leap for guests to be eating it. Val [Cantu, the chef] is always working on a kombucha, so I’ll throw that on [the pairing menu] with a textured cheese to help cut through it. That’s a non-alcoholic beverage pairing that people responded really well to.

I have a lot of problems with Sherry. I like Sherry and I think it’s badass with certain things, but 50 percent of the people that have it, don’t like it. We used to do it with a bite of foie gras and hazelnuts and then also paired it with the quinoa with almonds—I was doing a dry Sherry with it. The reason I think it failed as a pairing is the alcohol. Because [guests] had been doing low alcohol wines pretty much the whole night, and with 17 percent alcohol in front of them, it tastes like a shot at that point. People weren’t into it. But I was really into it, so it was heartbreaking. I [now] compromise and go with the Florido Moscatel, which has a little more sugar in it.

A bright spot in OZ

To be honest, I’m not that into Australian wines, but [the Mac Forbes Yarra Valley Pinot Noir, one of her ten best sellers] is really light and earthy, and it just reminds me of a Central Coast pinot. I thought it would be fun to do something different, and also learn about southern Australia and the Yarra Valley. It’s a killer wine, and it’s the lowest-priced bottle [of my pinots], so I don’t even have to work to sell it.

The value that Spain has to offer for what they have is insane. It’s like Italy was 20-30 years ago—I just have that feeling about Spain. It’s fun to have older vintage wine without really having to dig deep in your pockets, like in Rioja. We have the [Succés Vinícola] trepat [one of her most popular wines], which is a lighter red and goes really well with our food. There’s no tannin and it almost reminds me of Beaujolais, but just a touch darker in fruit.